After my previous antics with the 7834 readout system, the outcome was:

Here’s a few shots using the 7B85’s delta time feature, which lets you do fun things like measure frequency, rise-time, and pulse-width directly using the on-screen delay time read-out.  Thanks to Peter on the TekWiki who’s entry on the 7B85 pointed out these features. 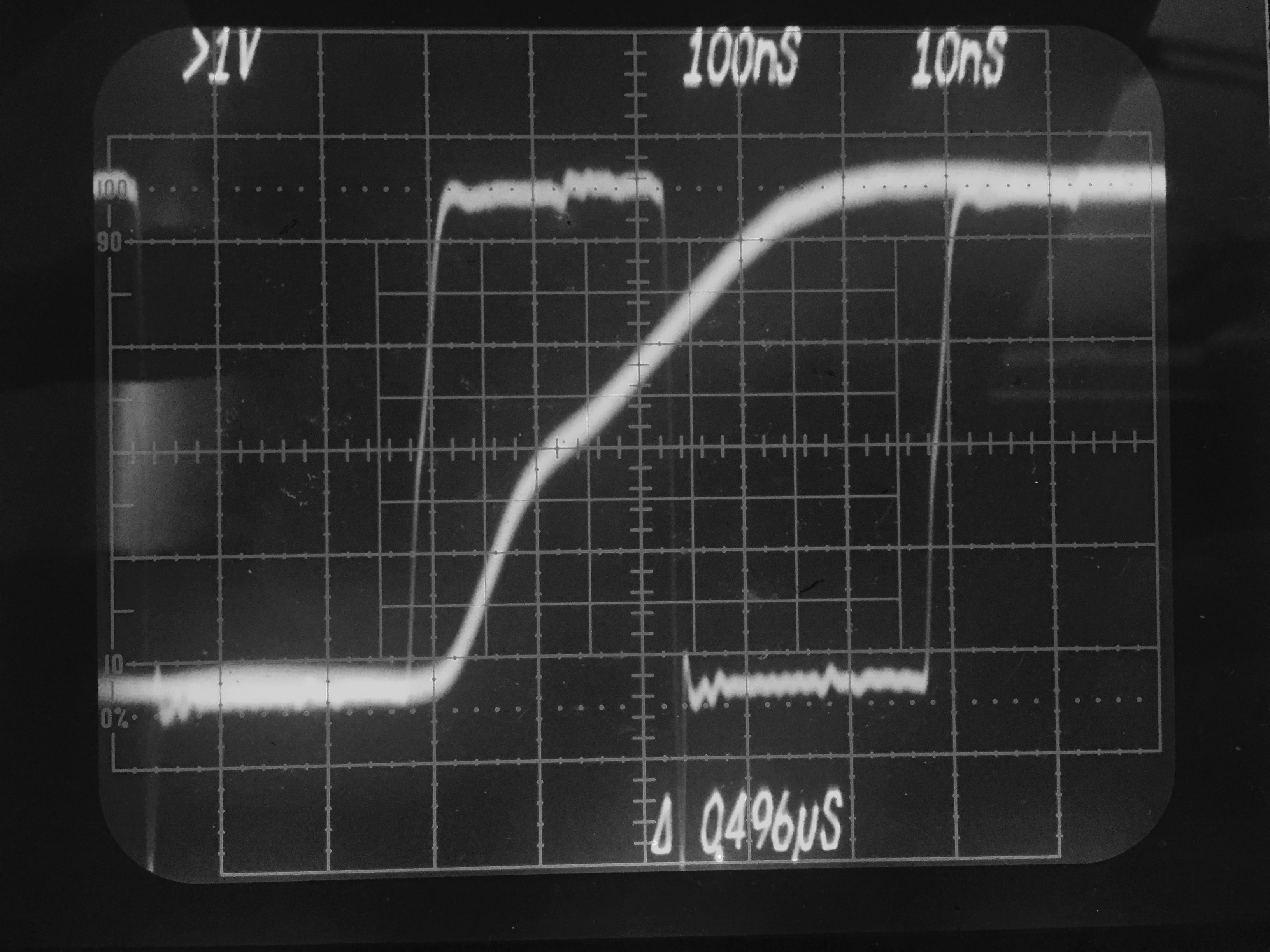 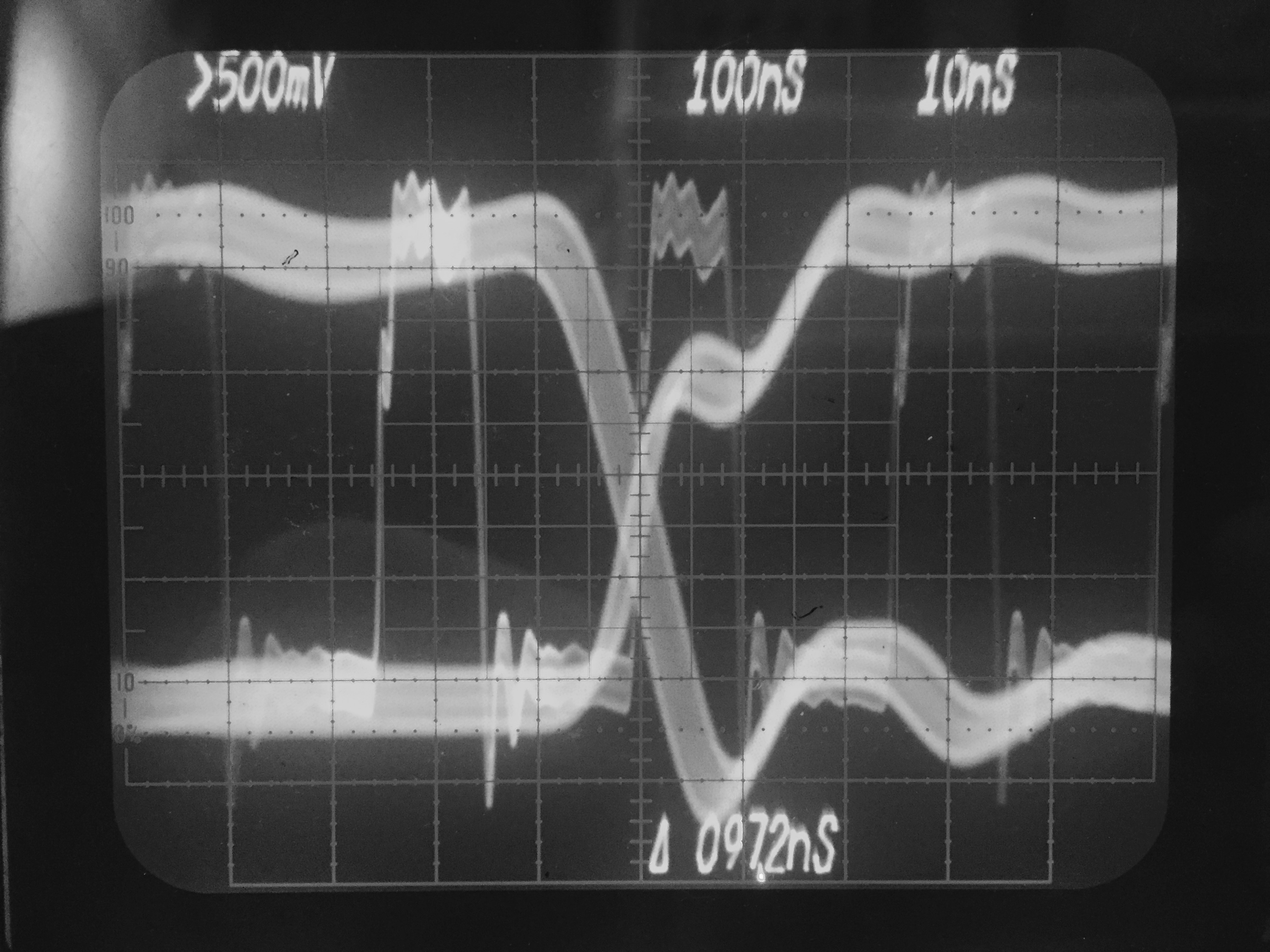 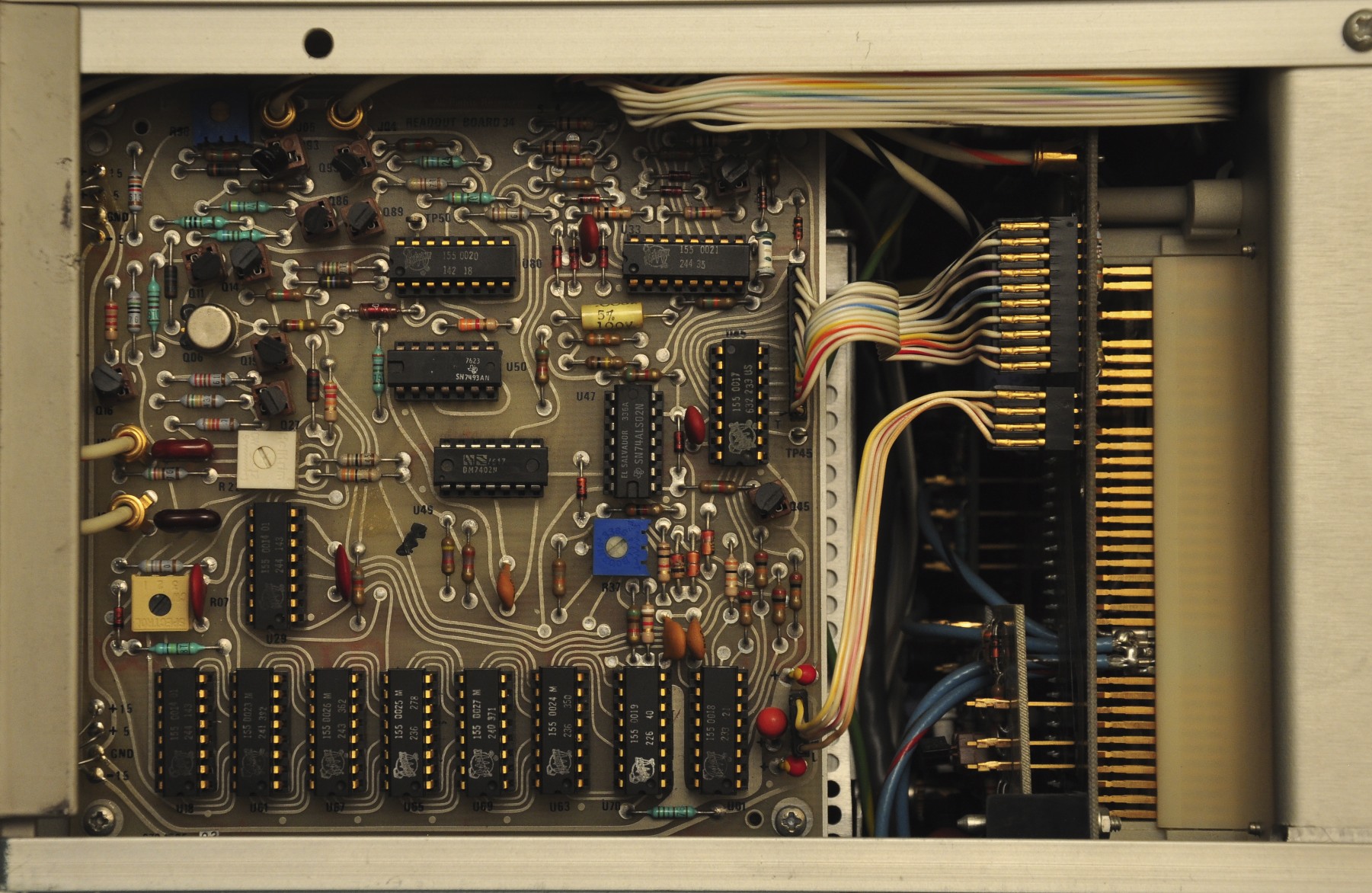 Picked this up about a year ago, and used it solely with my then slightly misbehaving 7D01, in combination with the DF01 Display Formatter.  Because the DF01 was gen’ing all the characters, I never noticed that the readout feature was misbehaving until I went to use a pair of conventional plugins. 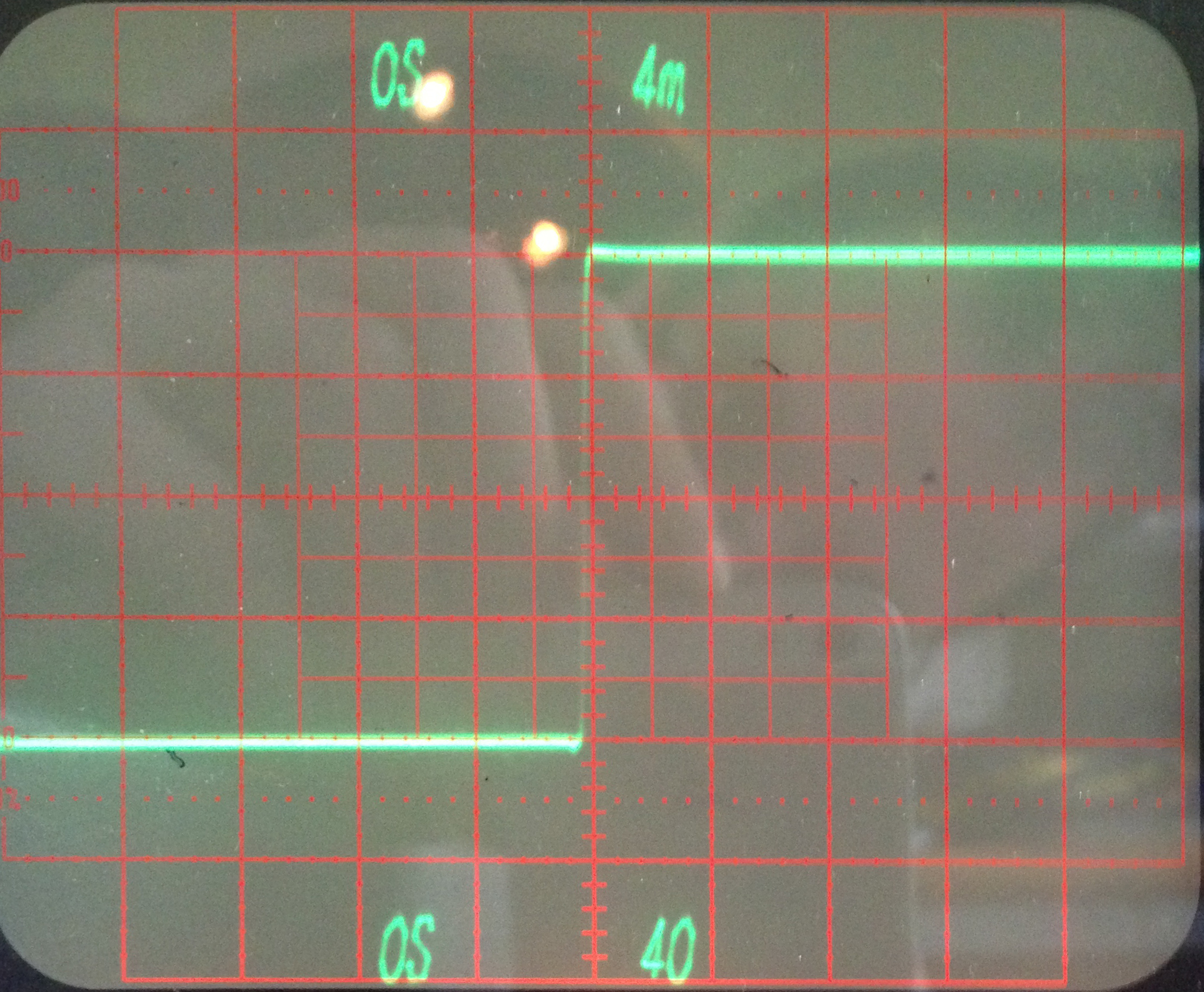 There’s a few things wrong with this:
1) The characters are incorrect
2) The top and bottom of the vertical plugin readout are supposed to be for channels 1 and 2 respectively, but they both seem to respond to channel 1 only.

Regarding the incorrect characters, it appears that from this table, the characters are shifted one to the left of what they should be. ‘0S’ should read ‘1V’, and ‘4m’ should read ‘5u’  Columns and rows are selected by way of a current loop between the plug-in and mainframe, using .1ma steps between 0 & .9ma. 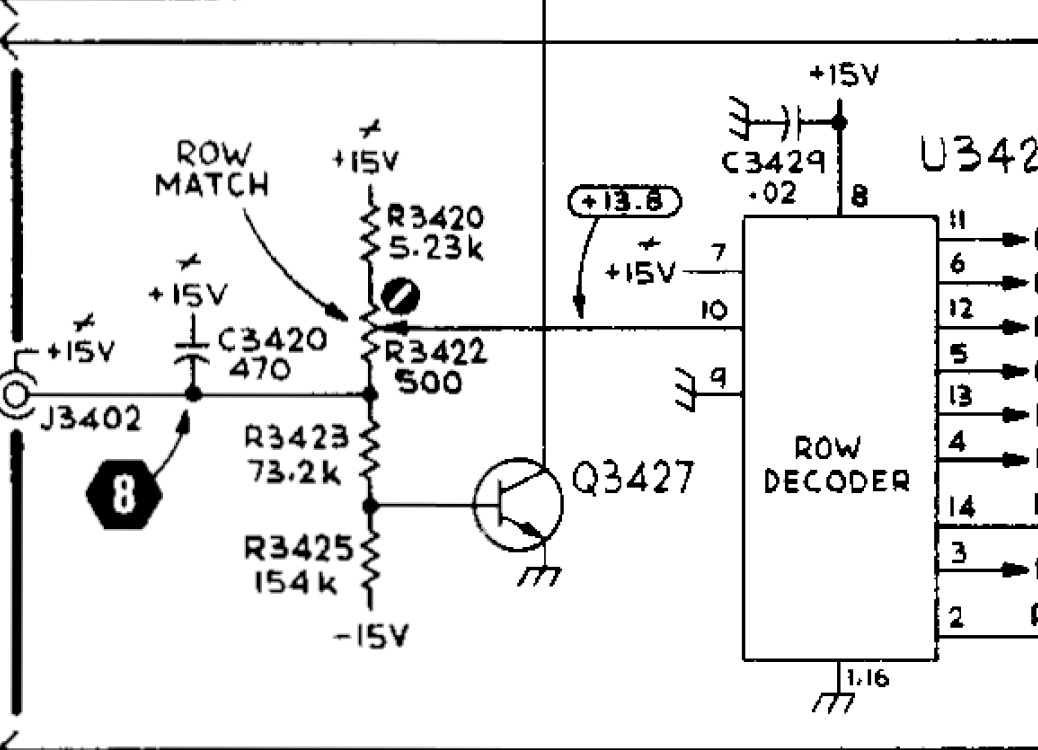 “Score!” I thought,  but sadly turning it does nothing.  Also, my columns are the issue, not the rows.  UPDATE – Column Match doesn’t do anything either.

So I started poking around with my 7D20 and found something strange coming out of the U3433, the custom timer chip: 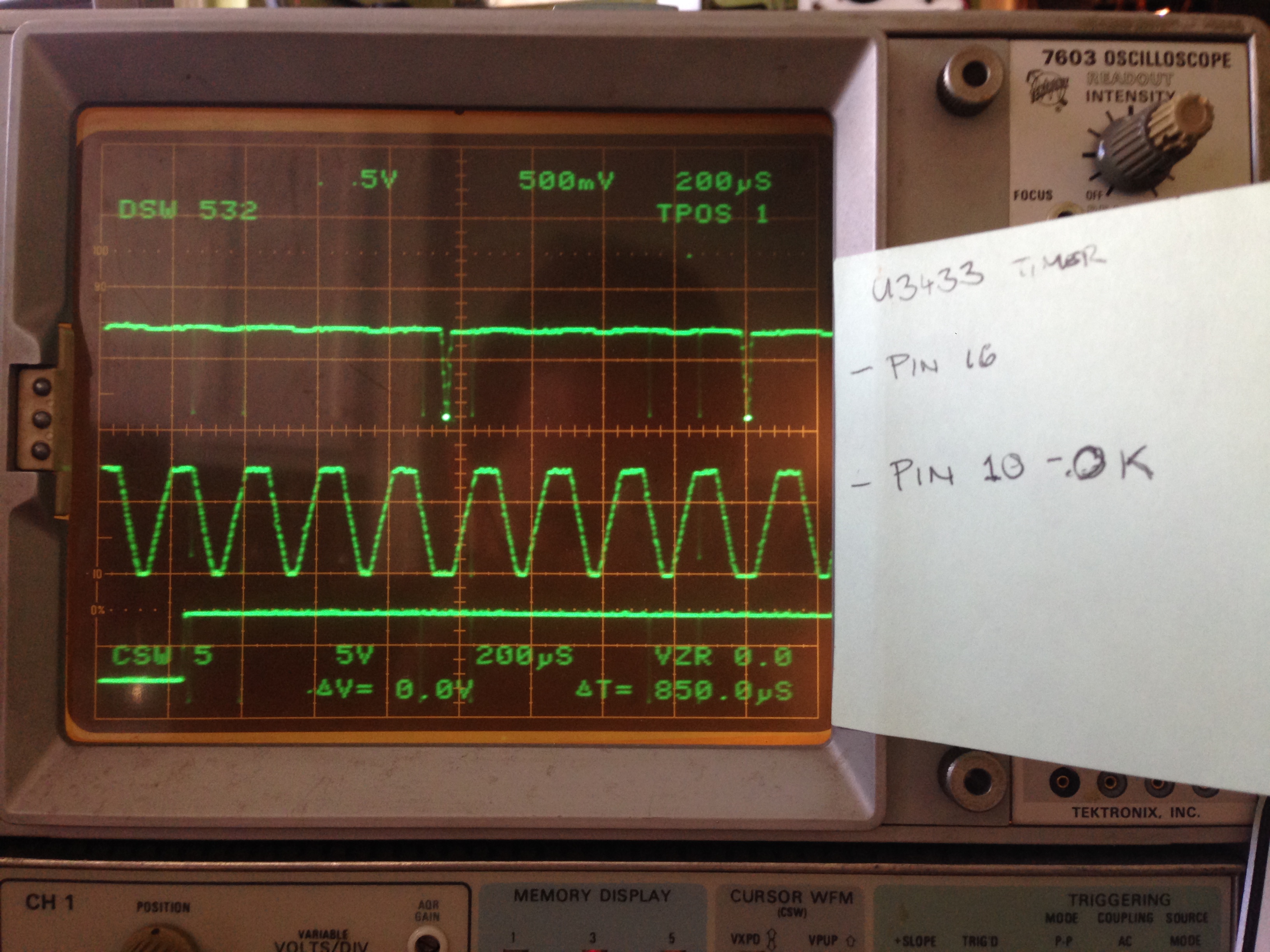 So there should be a negative going pulse on pin 16 that corresponds to the waveform on pin 10.  Also note that negative portion of the waveform on page 10 are shorter where the pin 10 pulse is missing.  I went ahead and ordered a replacement U3433, we’ll see if that does anything.  In the mean time, I’m off to the tek message board…

09/16 UPDATE:
Heard back form a gentleman on the forum:
1) What I’m seeing on the output of U3433 is not uncommon and due to display skip (which is described in the manual, I just have to wrap my head around it)
2)  He recommended swapping U3429 row decoder & U3418 column decoder – did that, no change.
3) He recommended swapping U3232 row data switch and U3263 column data switch.  oh fuck, those are BURIED.  Standby for some fun. 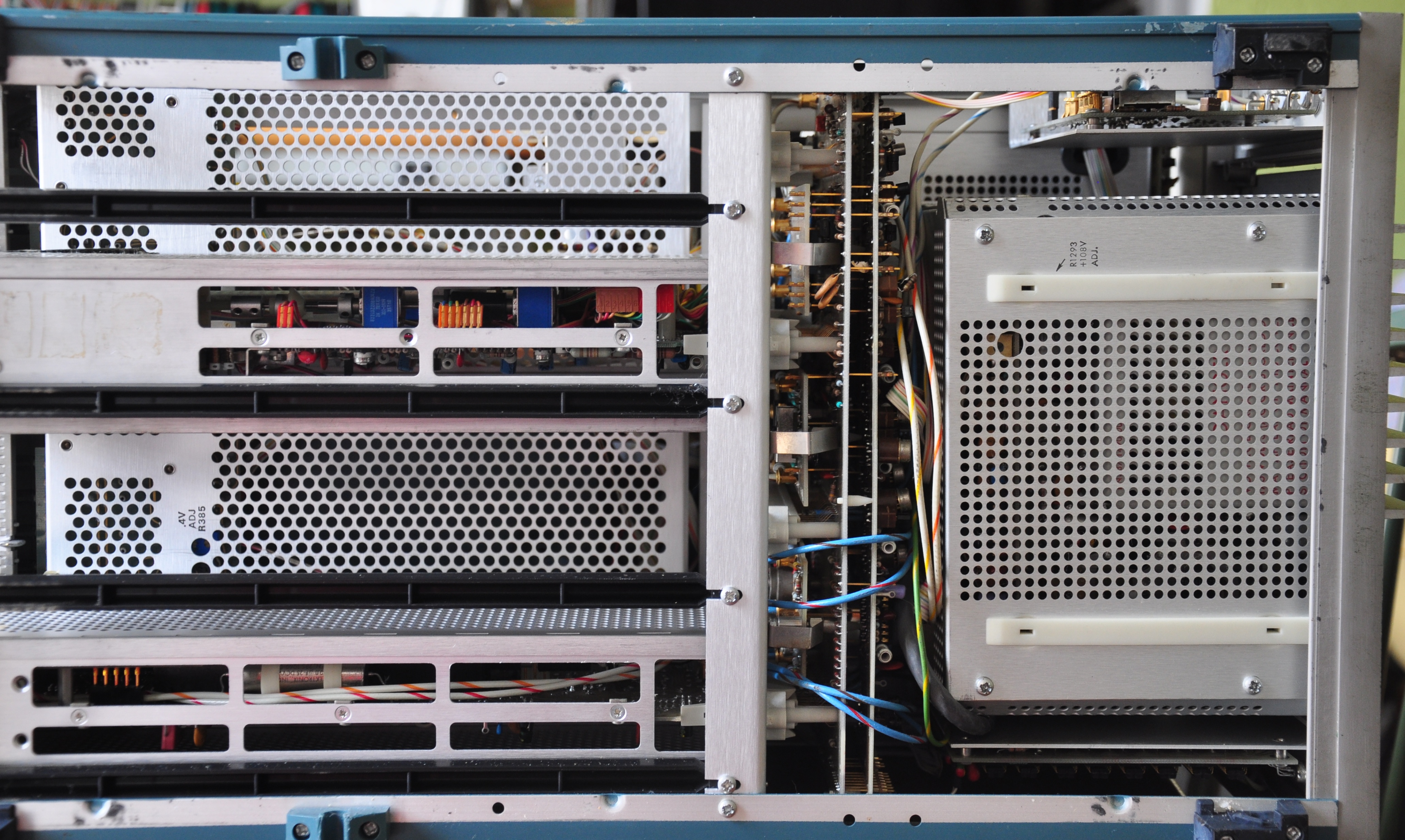 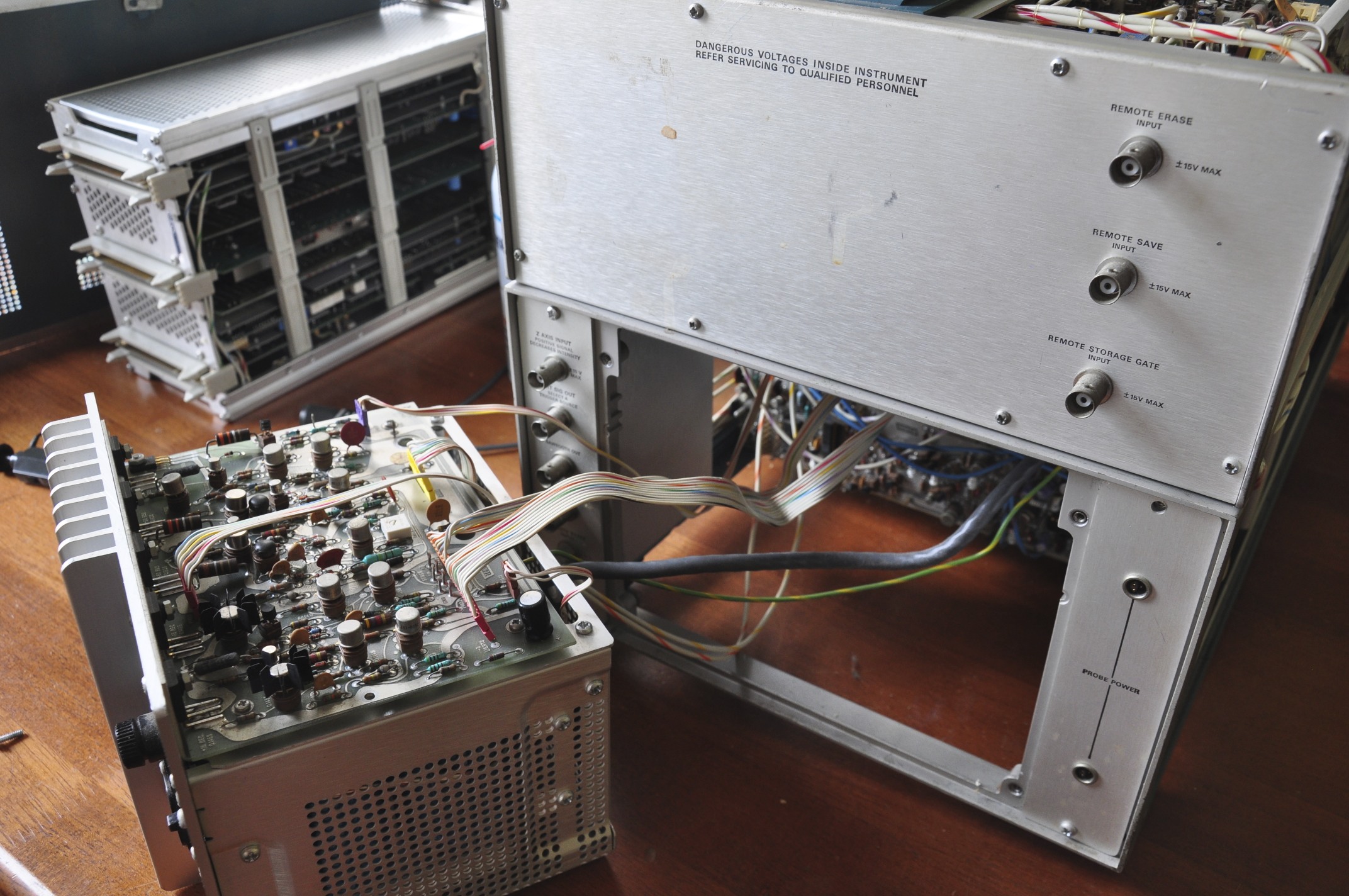 resocketing a few of the transistors fixed the missing readouts on the left horizontal bay, and the upper/lower duplication I was seeing.  Now every bay has it’s readout, it’s just wrong.

9/19 UPDATE:
Well, this has suddenly turned into a larger problem.  Yesterday I’d gotten some of the characters to change by paralleling in a decade substitution box.  Today I tried again but paralleled the wrong resistor (R3418), and I as was trying to pull the lead (live – dumb) I shorted something, heard a snap from the power supply, and the display went crazy, then dark.  I shut it down, and when I started it back up, U3447 started to release it’s magic smoke.
I can only suspect that one of the legs of the power supply has gone awry, but the power supply wont fire up when not under load.  I’m at a complete loss as to what to do next…

OK – moving on from despair…
With the readout board fully disconnected, the scope powers up and behaves normally (sans readout).  IMPORTANT NOTE:  When disconnecting the mini coax connectors, note that some of them have shield potentials of 15v, so take care to make sure they don’t touch the chassis.

In retrospect, I should have suspected U3401 given that ‘>’ worked but ‘IDENTIFY’ didn’t, since it’s U3401 that signals the column & row data switches to run through the sequence of characters to spell ‘IDENTIFY’.