This is an attempt to capture all of the knowlege that exists regarding the ROM issues on the Tektronix 7854 Oscilloscope.  My machine, serial # B042029 suffered from this problem, hence my interest. If somehow you’re reading this and have any corrections or questions, please chime in.

The Case of the Rotting ROMs

One of the more common problems with the Tektronix 7854 is Rom rot.  Over time, the Mostek mask ROMs start losing bits.  It’s a well known issue that has been discussed a number of times.  Why am I bringing it up one more time?  Because I don’t think all of the information has ever been compiled into one place.

There are a number of resources out there:

What’s on the board:

Above is a photo of the original ROM board.  It contains:

The FPLA (an early FPGA) watches all 15 address lines and outputs 6 address lines and a flag.  When an address is called that has a newer segment of code on the EPROMs, the FPLA decodes the incoming address, puts an altered address on the board’s bus, and sets a flag that switches the chip selects from the main ROM to the patch EPROMs. The patch itself is only a few words, enough to jump to another part of the EPROM where a new segment of code resides.  The EPROMs also contains ‘normal’ code that is directly addressed.

A note on versions:

Early versions had an external battery backup option, as evidenced by a pair of banana jacks on the rear, and separate RAM & ROM boards.  I believe there to be 2 or 3 versions of the firmware for the original board, denoted by the last two numbers of the part#s. The versions of the EPROMs must match the FPLAs.

Dan on the Teksopes group reports his version 1.03 has the following:

Dan and I have confirmed that the contents of the -00 and -01 mask ROMs are identical.  Thus the difference in versions is only in the FPLA & EPROMs, and the ROM part numbers were only incremented due to a change in supplier, from Mostek to Motorolla.

Holger, who is working on a replacement board (more below), mentions a version 2.0, which I believe is what’s on the later, combo RAM/ROM boards.

I still don’t know for certain how the suffix on the part numbers map to firmware versions.

Late versions (Serial B100000 and above*) had a built-in battery backup on a combined RAM/ROM/Backup board, which occupied the larger RAM slot, forward of the ROM slot.

* That’s according to the change info, but Bob – N3XKB reports his SN#B100078 unit still has the old configuration.

Raymond on the TekScopes board: explains the difference in behavior in a working unit:

With the original version with external battery backup, recognisable by the two banana sockets (red and black) on the rear panel, you’ll see all lights coming on for a few seconds, then most will switch off, you’ll hear a beep (if that’s enabled with the switch on the rear panel) and you’ll see the text “self test complete” on the CRT, if your Readout intensity setting is sufficiently high.
If you then press the “stored” key (slightly to the left above the blue key), you’ll be able to see the horizontal stored trace (a flat line if nothing stored) and you can see the readout text of the stored mode.
With the newer version (integrated ROM/RAM, internal backup), you’ll either see and hear the same or you won’t see anything, apart from the power light and the graticule illumination if that’s on. It depends on the position of the switch on the rear panel that allows you to start up with self test of from backup power. 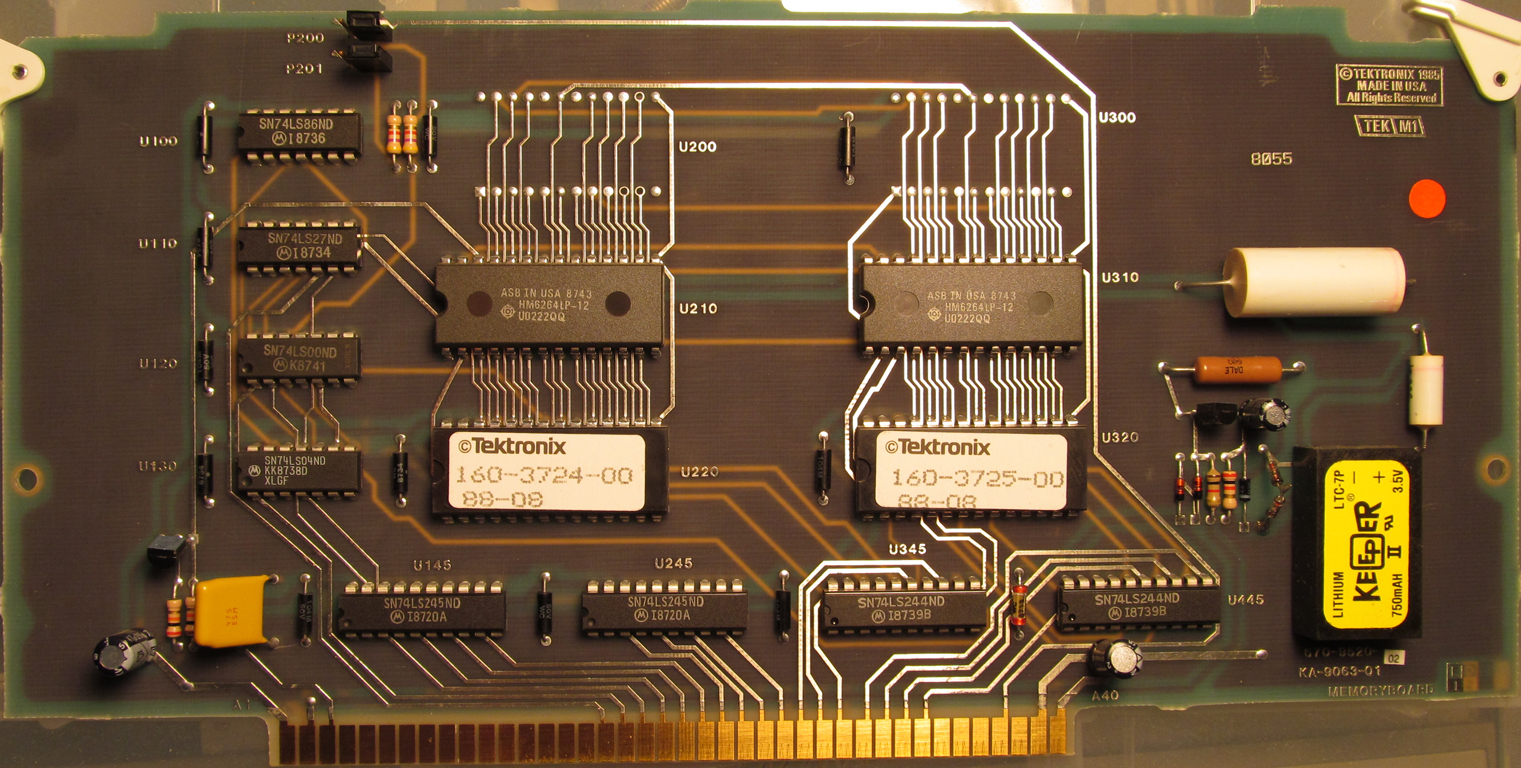 What are our options?

Fortunately, ROM images are available, and we have a few options in how to make use of them.

None of the above EPROMs are in current production, some are easier to acquire than others, and only the 27128A is programmable by inexpensive USB programmers such as the TL866.  Suffixes are important, as they denote the access speed.  Several people have confirmed that 350nS EPROMs are necessary and have reported intermittent issues in using 400nS chips.

This approach uses the original images, and relies on a working FPLA, and matching patch EPROMs.  You can use either (4) MCM68766C35 or CY7C64 EPROMs, and the -00  images on the tek Wiki. (also zipped here)

This is a good option for initial troubleshooting, but as it relies on a working FPLA, may still be prone to future issues.  The stability of the FPLAs is somewhat unknown, though there have been reports of them being a source of trouble.

Most solutions that have been described elsewhere involve the use of patched images, which already include the patch terms.  This obviates the need for the FPLA (in fact it must be removed), but still requires the patch EPROMs.

You can again use either (4) MCM68766C35 or CY7C64 EPROMs to replace the mask ROMs, and if you have anything other than -02 version EPROMs, you must replace those as well with (2) 2716-1 EPROMs.
This zipfile from David DiGiacomo contains the images required.

This is the solution documented on the Vintage Tek Museum’s page, and requires (2) 27128A 16k EPROMs, which are also out of production, but easier to acquire and program. Using a pair of 16k EPROMs covers the address space of 4 original 8k ROMs.  These require adapter sockets, which may or may not interfere with the ability to retain the GPIB board, depending on who you ask. As with the above option, if you have anything other than -02 version EPROMs, you must replace those as well with (2) 2716-1 EPROMs.

You must also rewire A13 & Chip Select lines now that the address space is handled by 2 chips instead of 4.  From the Tek Museum’s page:

Wire new CS. Start by disconnecting the existing CS from U200 and U210 pin 20. We did this by simply not connecting pin 22 in the EPROM adapter (which connects to pin 20 on the PCB) and then flying a new CS wire directly to pin 22 of the EPROM:

Option 2: (We have not implemented this so consider it unverified) Cut and lift U420 pins 9 and 13. They will float high or you can connect these pins to +5V.

This zipfile from Pentti Haka contains the images required.

Option 4: Build a new board

Holger Lübben is working on a new version of the combined ROM Diagnostic board.  He’s still testing it and will release it when it’s done.

Notes on the Memory Map

The CPU is the Texas Instruments TMS9900.  Here’s another good overview of the chip and it’s pin-out.

Paraphrasing from a few notes across the Tekscopes group:

Here’s a puzzle: Why did Tek provide two unused memory chip sites on the new board? There is only space in the address map for another 8K bytes or 4K words between E000 and FFFF.

If I understand correctly, with the removal of the patch ROM at 8000, Tek may have changed the RAM starting address from A000 (old RAM card) to 8000 (new combined memory card). That would mean the firmware was changed, and the new ROMs may be able to address RAM from 8000 to FFFF, which is double the old amount. They have only installed RAM for 8000 to BFFF, and the unused sites on the new memory card would be for C000 to FFFF. 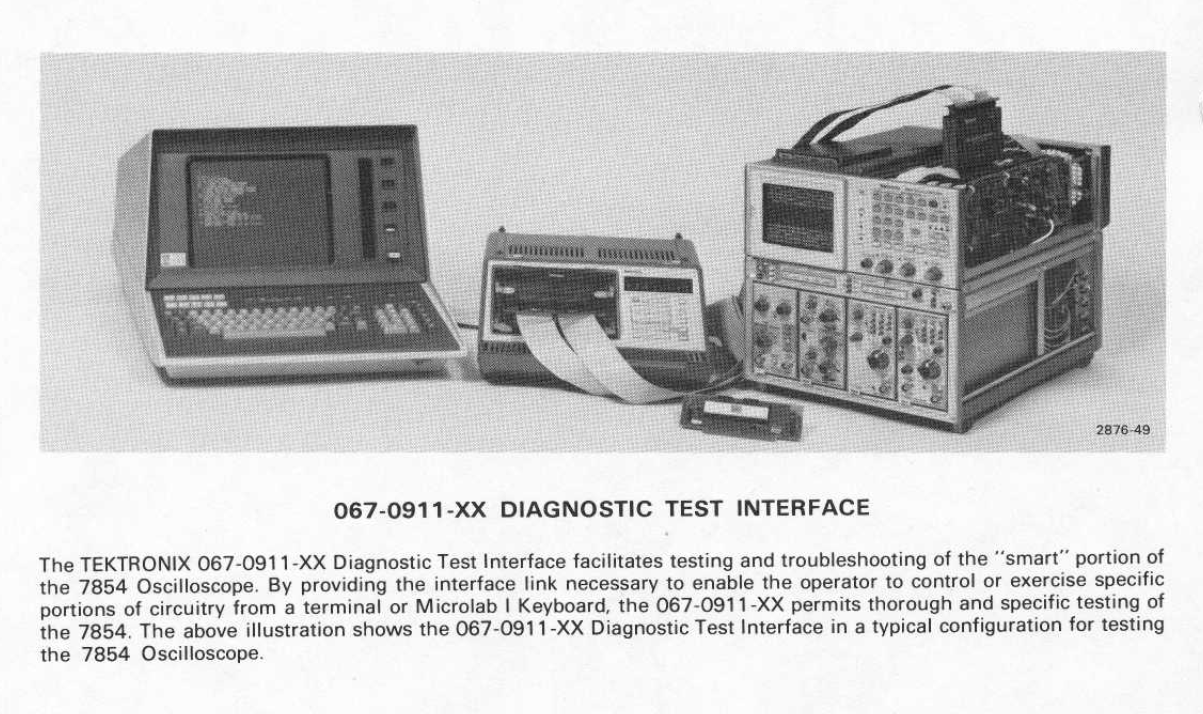 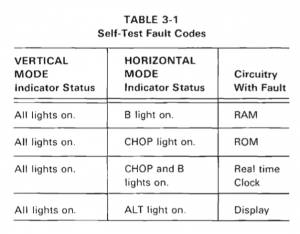 It was this chart that led me to the ROMs in the first place, and unfortunately, it’s also this chart that confirms that I have a bad display board.  After reading out all of the ROMs, comparing them against the copies on the wiki, I was able to identify that U210 was bad.  After a few false starts, I burned a replacement MCM68766C35, verified it, and re-installed the board.

WRONG – Reading Is Fundamental.  I have ALL lights on, which is not listed in the self test.  Which means It’s getting hung up in booting, and I’m likely not done with the RAM card.